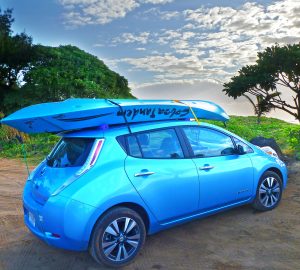 The main reason for us to go solar was to reduce our carbon footprint, and a large portion of the CO2 that we as a family produced was due to driving gas-powered vehicles.  So the easiest solution to that was to size the system so it could charge an electrical vehicle additionally to powering our household.

While we were designing our photovoltaic system we already had an electric car in mind – a Nissan Leaf.  The general recommendations based on an average mileage of 12,000 miles per year are to add between 2.5 kW (recommended by Ford and SunPower) and 3.6 kW (BMW) to what the household needs.

This number brought us close to 6kW, and the Leaf charges at slowly 3.3kW or fast 6.6 kW, so we decided to fill up the south side of the roof with a 6.8kW array. Sizing it above 6.6kW allows one additional benefit: 100% solar charge. In most areas, with time of use metering and cheaper night-time off-peak electricity  this is a very theoretical benefit, but on Kauai all night-time energy is made by burning oil and producing greenhouse gas in the process, so it’s not environmentally friendly at all. Additionally, the local utility company KIUC charges us 47c per kWh we use while paying about 21c per kWh for the solar  electricity our system generates, so financial reasons for solar charging are very strong.

We opted for 24 LG 285 modules. Their efficiency was near the top of what was available at the time we planned the system.

Because PV modules produce fully only for a few hours a day, noon with bright sunshine when it is not too hot, we are “borrowing” 10-15% from the grid, during most charging time, sometimes when production is low we use the level one or trickle charger.

We were pleasantly surprised when we realized the Leaf did not only get 3.8 miles/kWh but 5 miles/kWh instead, according to the American Association for the Advancement of Science’s article on the best and worst places for electrical cars electrical cars are more efficient in moderately warm climates. (8 km/kWh, or 12.5 kWh/100km.) A useful calculation is, to convert that to money. Let’s assume solar electricity costs 10c/kWh. At that price 5miles or 8km cost 10c and driving 100km costs $1.25.

Earlier I mentioned how we get paid less than half of what the utility charges us, so more explanations here. In most areas, when a system is grid tied the utility company offer a service called net metering: if you produce a kWh and feed it into the grid you can take it out of the grid at a later time.  It’s a bit more complicated by how long the 2 parties “bank” the energy, peak and off-peak energy prices etc. Some areas like Kauai have different systems though, ours is called Schedule Q, a kind of wholesale rate calculated by “avoided cost”.

Tesla may now be headquartered in Texas, but it still has a formidable presence in California, where public policy and funding has paved the way for electric passenger cars, and now, electric big rigs.
1    View on Facebook

Tesla has been the EV market share leader by a huge margin for a long time, and that remains the case. However, other brands are starting to make a dent.
View on Facebook

Ford announced that it had built its 150,000th Mustang Mach-E since the vehicle started production almost two years ago.
2    View on Facebook

Governments around the world are transitioning their fleets to electric vehicles. Often these electric fleets consist of just a handful of EVs, but that’s not the case for the California Department of Transportation (Caltrans), which [...]
View on Facebook

Kauai EV2 days ago
EVs are better all the way around.

“The elephant in the room is the supply chain of fossil fuel-powered vehicles, not that of electric vehicles,” says lead researcher.
View on Facebook