PUHI — Sonja Kass has not paid for fuel for her car for the last two years.

“We put in a solar photovoltaic system to power up the batteries,” Kass said. “Ever since then, we charge up the car at noon and over the last 2.5 years, we have not gotten an additional charge from the Kauai Island Utility Cooperative for charging up our vehicle.”

Kass was among the Kauai Electric Vehicle Alliance promoting a free electric vehicle ride-and-drive program which will take place at the Kauai Community Market from 10 a.m. to 1:30 p.m. Saturday at Kauai Community College.

“I have a home PV system, too,” said Al Pugsley, a visitor from Kansas City. “It’s not as big as I wanted it to be, but since last year, it is enough for my two cars — a Tessler and a Nissan Leaf. Our system has three panels and it generates enough to drive the two cars more than 300 miles. That’s a lot of driving for us.”

The free ride-and-drive program was accepting registrations for prospective users of electric vehicles being led by the Blue Planet Foundation and the Sustainable Transportation Coalition of Hawaii.

David Lee of the Electric Vehicle Alliance said he got his used electric vehicle last year from a local auto dealership.

“It’s three years old,” Lee said. “It’s a 2013 model, but when you get an electric vehicle, there is a tax credit so you are able to get better deals.” 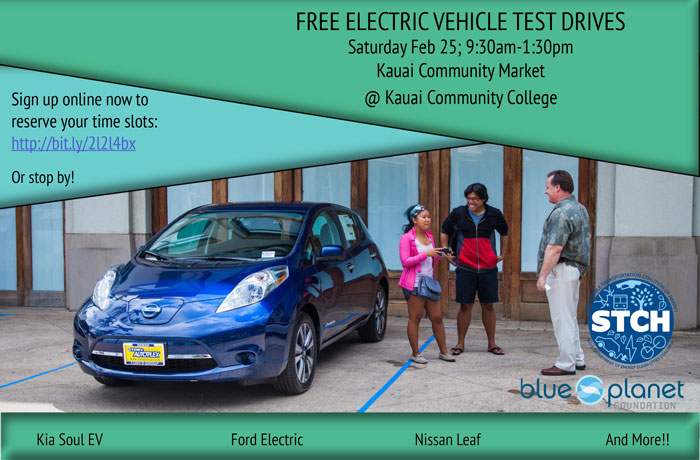 Wireless EV charging has been a fun topic for as long as I’ve been writing about electric cars (more than a decade). Yet, it’s not exactly common (it’s almost unheard of) to find one in an EV owner’s garage. Companies aren’t giving up yet, and that includes Siemens and MAHLE, which have ju...
1    View on Facebook

Originally posted on EVANNEX. By Charles Morris.
1    View on Facebook

Kauai EV14 hours ago
Shopping for an electric car? Check this out.

Electric cars assembled outside of North America may lose access to EV tax credits within a week, and buyers need to act fast to save money.
1    View on Facebook

Kauai EV2 days ago
The House has passed the Inflation Reduction Act of 2022!

This is excellent news for MANY reasons, including the significant investments in clean energy and transportation and nature-based solutions. Most significantly, it will dramatically reduce our emissions. We look forward to seeing this signed into law.

Great news for our planet. (And Humanity.)

Here's the global picture on the progress toward electric vehicles. The graphics speak for themselves. This suggests progress, but we must do more to wean ourselves from fossil fuels and reduce planet-warming emissions.

Global EV sales have grown exponentially, more than doubling in 2021 to 6.8 million units. Here's a look at EV sales by country since 2011.
1    View on Facebook